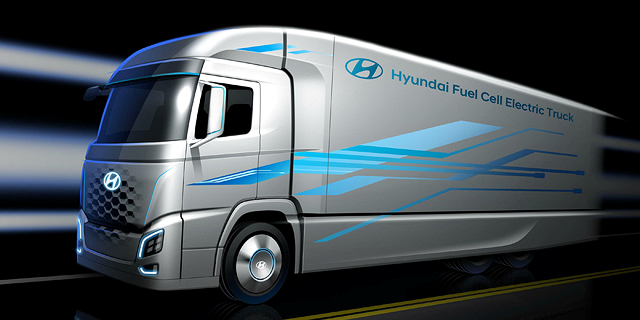 The test, headed by Israel-based Colmobil and Taavura Holdings, is set to start in 2020

The Hyundai Motor Company is set to conduct an extensive pilot of hydrogen-fuelled trucks in Israel in 2020, according to two people familiar with the matter who spoke with Calcalist on condition of anonymity. A Hyundai delegation visited Israel last month to advance the venture and met with executives at the Prime Minister’s offices, the people said. The test will be executed by Israeli automotive retailer Colmobil Ltd. and transportation and logistics company Taavura Holdings Ltd., which owns the largest local fleet of trucks, the people added. 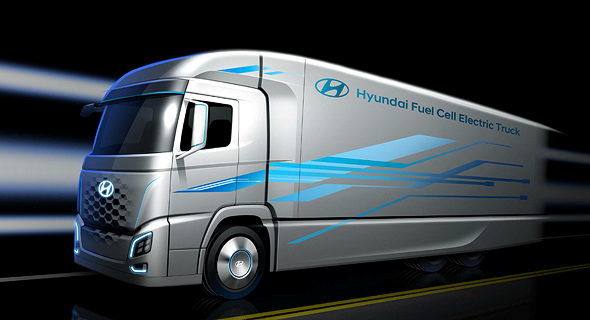 Hydrogen vehicles have existed since the 1960s but have never been widely adopted due to the high availability and low costs of petrol and diesel. Unlike petrol and diesel-fuelled vehicles, which operate by burning fuel and creating pollutants, hydrogen vehicles utilize an electrochemical process that converts hydrogen and creates electricity and water as byproducts. The electricity is stored in the vehicle’s battery. Increasingly stringent environmental regulations implemented in recent years have caused some global manufacturers to turn back to hydrogen vehicles, among them Hyundai and Toyota. Truck manufacturers are also affected by the new regulations, as they are considered highly polluting vehicles. Hyundai has already presented a hydrogen truck that started operating in Europe earlier this year, with a stated driving range of 400 kilometers between fuelling. The company said it intends to start using hydrogen trucks in Switzerland and New Zealand in 2020.

Israel is considered a prime testing ground due to its varied climate, extreme road inclines in the Galilee and the Golan Heights, and long roads in the Aravah. Taavura is the official representative of Dutch truck bran DAF Trucks in Israel, and has a technical and logistical center that already collects data from its truck fleet about parameters such as stress, exertion, and wear. Israel currently has no hydrogen fuelling infrastructure, but the Ministry of Energy is expected to issue a tender for a proof of concept soon.

1.
"Hydrogen vehicles have existed since the 1960s but"...
but why having water as byproducts when we can produce pollution instead?