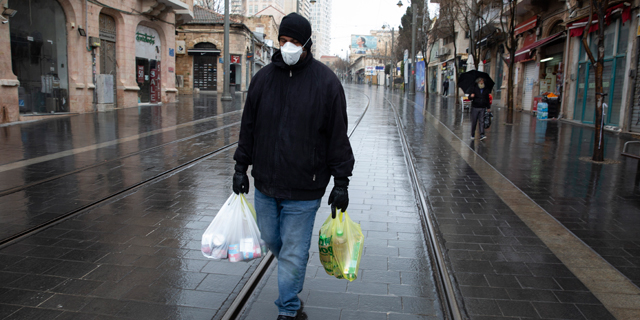 In Israel, Soldiers to Patrol the Streets in Effort to Enforce Covid-19 Regulations

Confirmed cases of coronavirus in Israel reached 4,831 on Tuesday morning; gatherings in a public sphere no longer allowed

The number of confirmed coronavirus (Covid-19) cases in Israel reached 4,831 on Tuesday morning, according to the Israeli Ministry of Health. Of those, 83 people are in critical condition, with 69 patients being on ventilators. So far, 18 people have died from the disease in Israel, including a 49-year-old woman with pre-existing conditions, the youngest fatality of Covid-19 in the country to date.

There has been an increase of 484 new cases over the past 24 hours, statistically, the same increase registered the day before. The health ministry has not released figures on the country’s testing efforts since last week.

A man walking with groceries in an empty street in Jerusalem. Photo: Amit Shabi

The Israeli government approved early Tuesday morning additional restrictions. Gatherings in a public sphere are no longer allowed, including for prayers and weddings. Funerals can be held in open areas only, with no more than 20 participants. The new restrictions come in addition to those approved last week in which Israelis were restricted from leaving their homes for a distance of over 100 meters, barring certain exceptions such as medical need or the procurement of groceries and other essential goods. Online commerce that includes door-to-door delivery is also allowed for all shops and restaurants. The government also gave the go-ahead to send 700 Israeli Defense Forces (IDF) soldiers to aid police in enforcing the restrictions. The soldiers will not carry weapons and will be accompanied by police officers at all times. According to the Israeli National Employment Service (INES), the unemployment rate reached 23.3% on Tuesday morning, with 89.8% of those who registered for unemployment benefits in March having been placed on unpaid leave.

Also on Tuesday, Moshe Bar-Siman-Tov, the director-general of the health ministry, said the ministry plans to announce a recommendation for anyone leaving their home to wear a mask. "There is no need to run out and buy masks. We will guide people on how to improvise home-made masks," Bar-Siman-Tov said.

The health ministry also released on Tuesday a new breakdown of the cities with the most coronavirus cases. Jerusalem still leads with 568 cases, but Bnei Brak is not far behind with 505 cases, despite its population being almost five times smaller than that of the former. Jerusalem and Bnei Brak have the largest ultra-Orthodox communities in the country. As a result, the Israeli government is considering a potential curfew on ultra-Orthodox hubs with a large percentage of cases.